MANY France and Portugal Pages 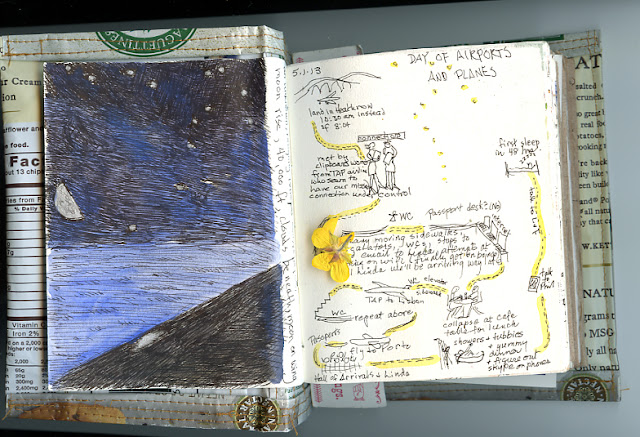 As some of you know, I went to France and Portugal with my friend Fran a couple of weeks ago.  We had gone to France together in 1992, so this was a kind of revisiting of that adventure with an extra week added on.  Each of these journal entries features a high point of our trip for me.  They aren't necessarily the most beautiful things we saw, but these are the kinds of things I love to notice when traveling. F
or example, while we were flying over the Atlantic in the middle of a very short night on our way to London from Charlotte there was a fine half moon reflecting off the wing of our plane.  Then the right hand side of the page traces a route through complicated airport maneuverings in London en route Porto, Portugal. 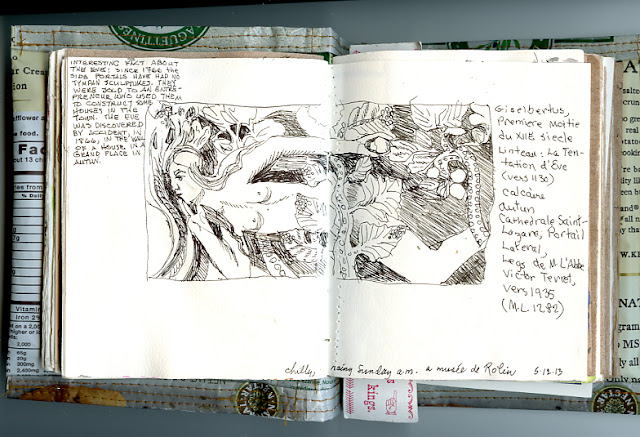 These pages aren't in any kind of order!  This is a sketch of one of my all-time favorite pieces of art, the Eve from the cathedral in Autun, France.  I've loved this piece since the 70s, and I finally got to sit in front of it and sketch. 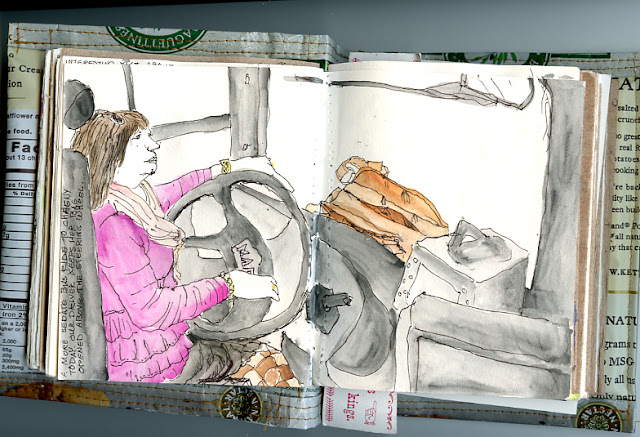 The road to Autun was long and circuitous.  We took a train from Goult, in the south of France, where we had been renting a small house for a week, to Lyon, and then another train to Chagney.  From Chagney to Autun we needed to take a bus.  The bus was enormous and went at a good clip through roads as narrow as wheelbarrow paths.  Our bus driver coming back from Autun was a tiny woman dressed up for a party.  She was a great driver, the countryside was stupendous, and the driver herself made the trip so enjoyable.  Her big orange bag was perched just beyond the steering wheel. 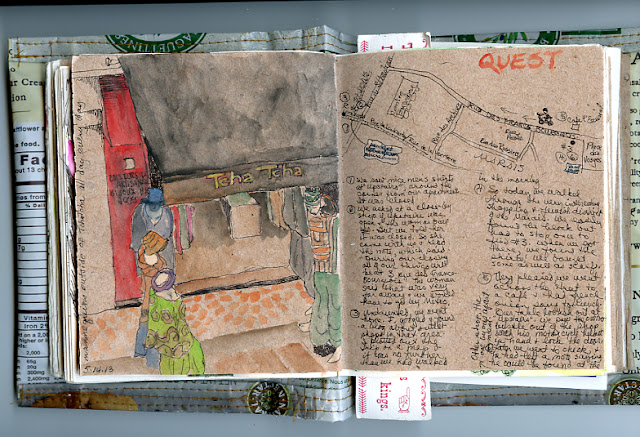 In Paris we rented an apartment for a few days.  Way down below in the street was a tiny shop among many other shops and bars/cafes.  Every morning the shop worker would drag five mannequins out and stand them in the street under her awning.  Fabulous! 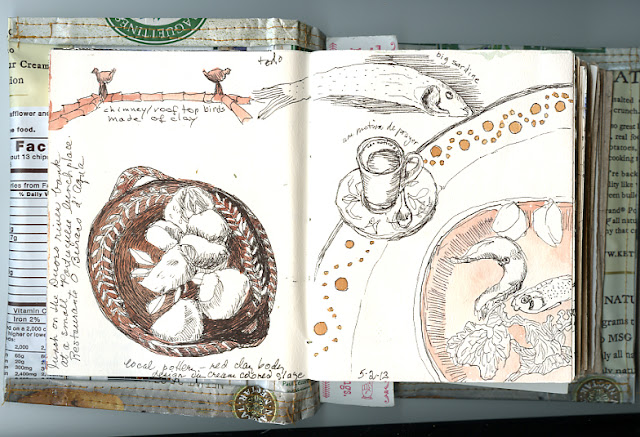 Our first stop on this trip was Porto, Portugal, where we stayed with a friend for two wonderful days.  Linda took us to places off the tourist beat, such as this workman's restaurant along the banks of the Duoro River, where we ate lots of different kinds of fish served on lovely pottery dishes. 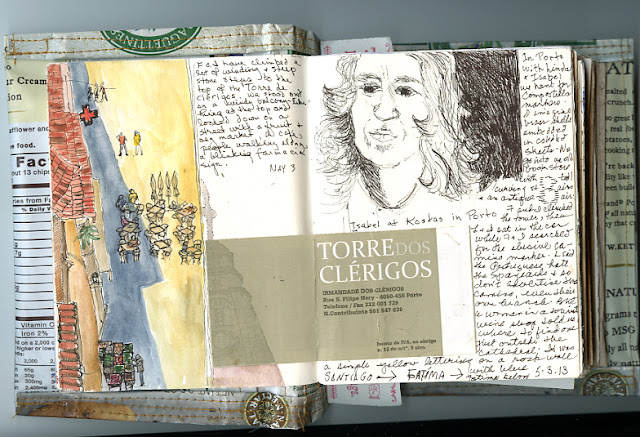 The next day in Porto we went with Linda and her friend Isabel to downtown Porto.  We climbed up to a tower and looked down on the city (drawing at the left). 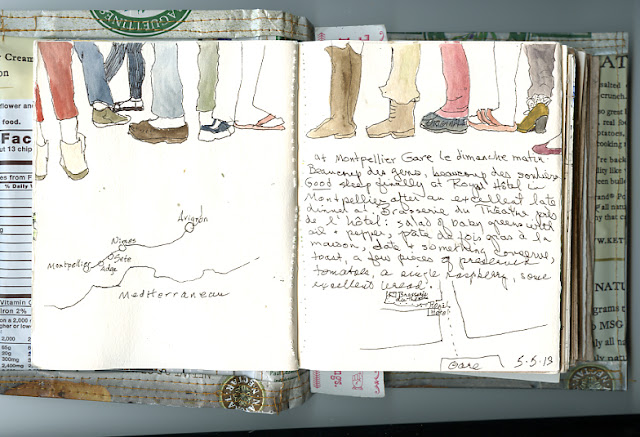 After we left Portugal we went by train to southern France, stopping in Montpellier for a night.  The next morning we took a train to Avignon.  The station was very crowded so we sat on our luggage and I sketched all the different kinds of shoes I could find. 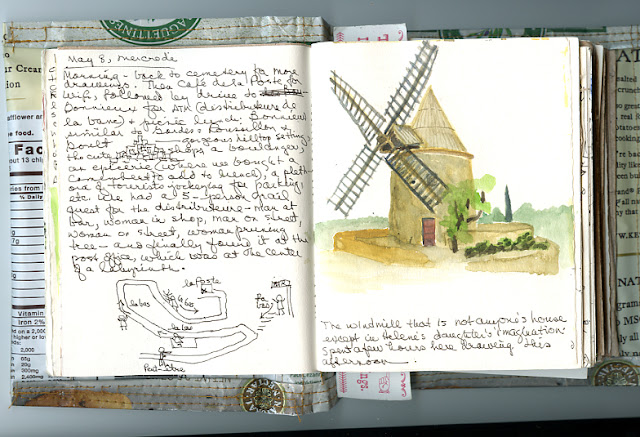 When we arrived in Goult to stay at our rental house we found ourselves in a 12th century village with the remains of a castle at the pinnacle.  Our house was carved out of the castle, and at the end of the road was a little windmill. 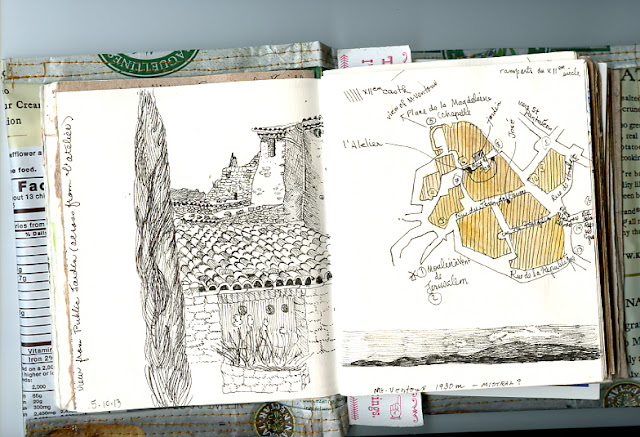 This page shows a view in Goult from the tiny park across the road from our house.  On the right is a copy of an archaeological map of the castle area.  We also went to an overlook that day and drew the Luberon Valley and Mt. Ventoux in the distance.  A mistral was blowing  and the sky was crystal clear except for a few blocky clouds near the peak of the mountains. 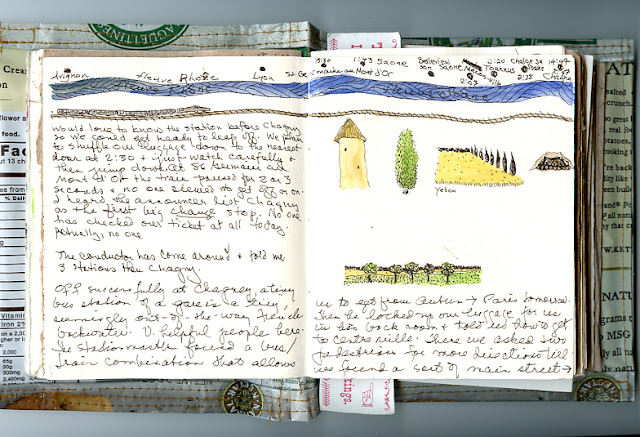 As we headed to Paris by way of Autun after our time in Goult I drew this from the window of the train. 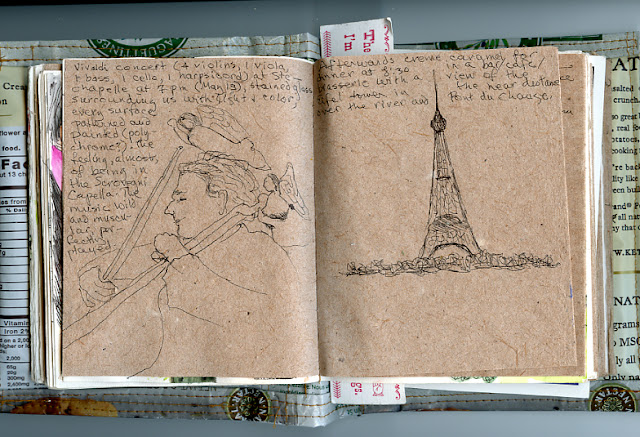 In Paris we had the experience of hearing a classical concert at le Sainte-Chapelle, the Gothic chapel in the former royal palace. 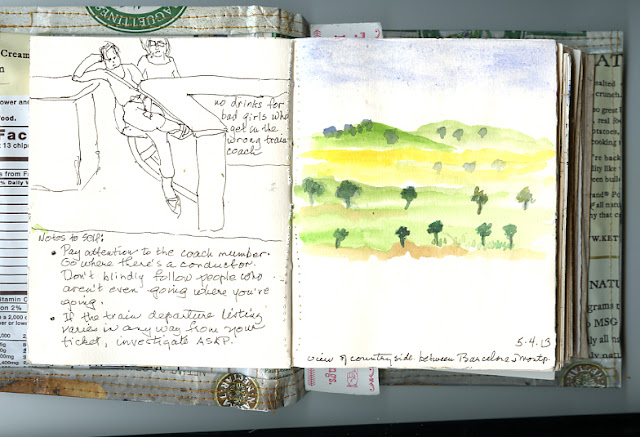 This was a scary/funny incident that happened on the train from Lisbon to Madrid as we crossed Spain headed to the south of France.  We got on the train in Lisbon for the overnight trip but found ourselves in the wrong car and with no way to get to the right car because the train was blocked in the middle and we couldn't move from car to car as we had thought we could.  The train was due to separate and send the half we were in to Paris while the half we were trying to get to was going to Madrid, where we needed to get to.  We had to jump off at the next stop and run in three minutes down the tracks to our proper car.  We made it, but as we were waiting for the next stop to make our dash, we had to sit in the empty cafe bar car and hope that we got off quickly enough to make the run we had to make. 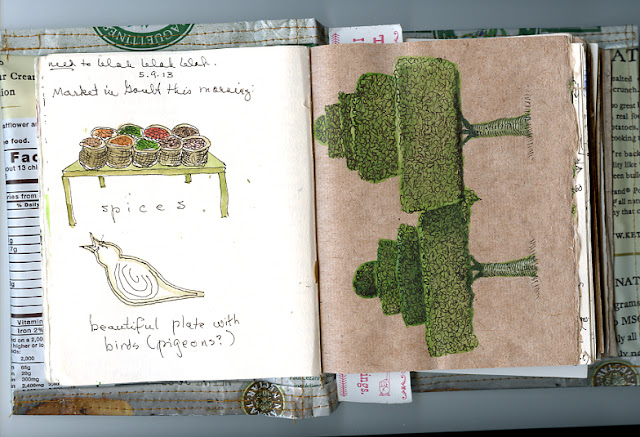 Back to Goult for this page.  On the left are images from a little market in Goult, and on the right (you'll have to hold your head sideways!) are two fabulous topiary cedar trees from the Gould cemetery.  All of the cedar trees there have been cut into topiary since the early 1900s.  It feels like being  Alice in Wonderland to walk and sit among those trees.  We could easily walk under the trees.
Posted by Gwen Diehn at 7:44 AM 7 comments: 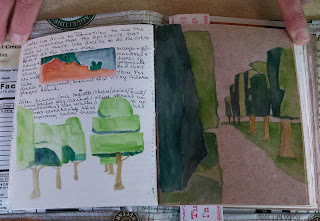 I'm in Goult , France, right now. Last night just before dark my friend and I walked to a little cemetery and saw enormous topiary cedar trees. I felt a sort of Alice in Wonderland strangeness walking among them.
Posted by Gwen Diehn at 7:20 AM 3 comments:

Posted by Gwen Diehn at 7:09 AM No comments: