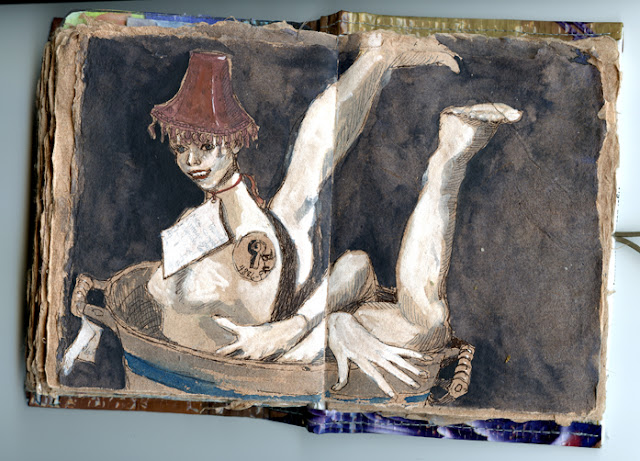 Over the weekend I drove past the Tobacco Barn and slipped in for a few minutes to check on the mannequin.  Had she been sold?  Had someone finally rearranged her parts?  The air inside the Barn was throbbing with midsummer heat and heavy with humidity and desultory shoppers.  No one played the piano today.  Back in mannequin land at the very end of booth A-16 the lights were dim and the few people who made it back there looked more lost than on a quest.  The mannequin was in exactly the pose I had left her in last weekend.  So I thought:  She needs a better hat, something to attract people to her fun spirit.  I put a rusty red brocade lampshade with little string tassels on her head.  She looked cocquetish and sort of shy, not the look I was going for exactly, but I drew her anyway.  Her arms and legs are now in a real tangle, and they seem to be dumped behind her, leaving her armless and legless but not really upset about that. 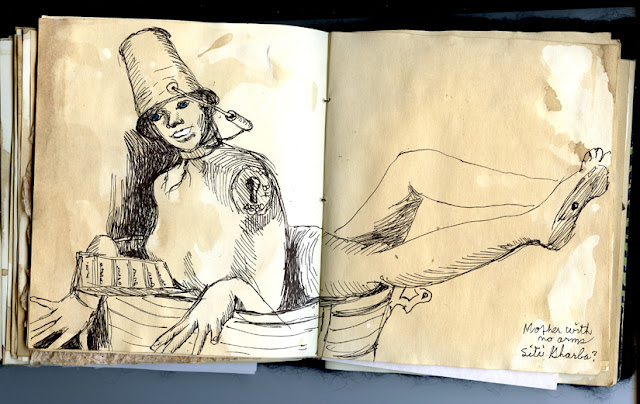 And then I had one more idea for her:  I decided no more Easter Sunday hats or even sweet little lampshades.  What this girl needs is a jaunty bucket on her head and a Girl Scout songbook!  With no arms and legs she has lots of free time.  So she's resting against her legs and using her arms to prop up her songbook.  I sketched her quickly on tea-stained paper in a different notebook and decided to keep the brighter background.  She's sailing away from her tangled, confined life!  She loves going to sea in a tub with a bailing bucket on her head!  "In yonder gre-e-en val-leys where stream-le-ets me-e-an-der...."

Eva G. commented that this mannequin series might want to become a children's book.  I like the idea very much of taking her further.  Definitely a series of prints, maybe an artist's book, maybe a children's book-- anyone else have ideas?
Posted by Gwen Diehn at 8:23 AM 1 comment: Links to this post 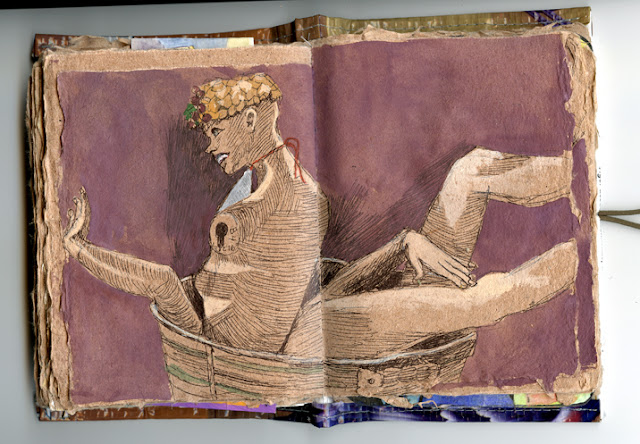 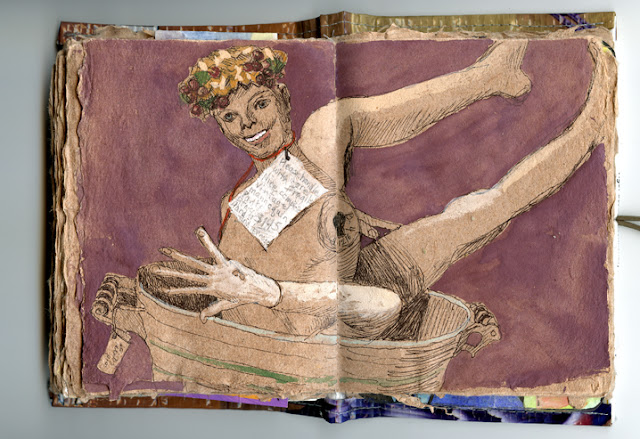 I had an irresistable urge to go revisit the mannequin in the tub at Tobacco Barn this weekend.  I wondered if she would even be there-- certainly I would have bought her if I would have had the $145.  She is, after all, a "hard to find teenager", and even if her tub comes for an additional $25 and her hat yet more-- still, I would imagine someone would have snapped her up.  But no.  No one had even rearranged her!  She was still lounging in the tub looking slightly crazy.  So this time I did it.  Very carefully I handled her fragile limbs and gave her a more adventuresome pose.  Then I drew her from two angles.  She now looks to me like she's paddling her tub- boat in a rough sea!  What a devil-may-care girl she is!  She has a sticky piece of something fluffy on the back of her hand, but that's not stopping her.
Posted by Gwen Diehn at 9:51 AM 7 comments: Links to this post

Mannequin in a Tub: Another Report from the Edge 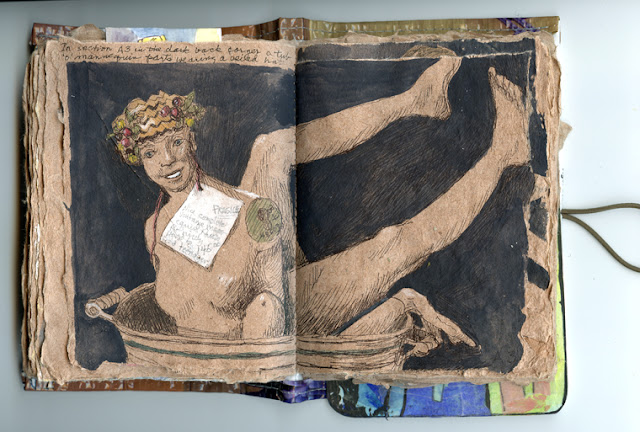 Yesterday afternoon five of us ventured into the Tobacco Barn, braving 90 degree heat and humidity and armed with sketchbooks and water bottles.  The Tobacco Barn is way too big to have air conditioning, but they have enormous rattly fans in strategic locations, which add to the atmosphere of another time period.  I went looking for a cool spot to park and found this great tub 'o' mannequin parts at the end of a dark row of things.

The mannequin wears a sign around her neck on a piece of red yarn;  it says "Fragile!  Nice complete vintage mannequin.  Pants fit nicely.  Hard to find teenager.  $145"  She also wears a perky straw and plastic fruit Easter Sunday church hat from the fifties complete with a net (were these nets called whimseys?) that creeps down over her forehead.  Her eyes are a little strange and her teeth are extra white next to her painted lips.  Best of all her limbs have been detached and tossed in the tub with her!  What fun she seems to be having without any arms and with her legs playfully sticking out!

(The drawing I did with a black waterproof Pilot V-Ball pen on willow and abaca paper.  I added watercolor when I got home.)
Posted by Gwen Diehn at 10:10 AM 3 comments: Links to this post