The butter box book is based on a longstitch binding.  There are directions for a longstitch binding and cover in Real Life Journals but they presume you will be deciding the size of the book based on the size paper you want to use.  If you already have a perfect cover (such as a two-stick butter box), start with the cover and then figure out the page size following these directions. 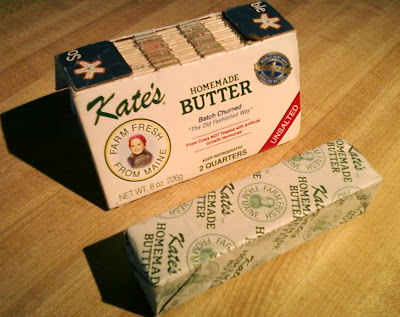 This illustration shows the finished journal next to one of the sticks of butter as a size reference.  I got my two-quarters butter box at Whole Foods, but you can probably find this smaller-than-usual butter box at other stores that have nice butters.  The journal in this picture has two extra pieces glued on the ends of the spine to cover some rather messy stitching that I did on this, the first one that I made.  I will give directions for a better way to sew the spine so that you won't need to glue on extra pieces (unless you want to). 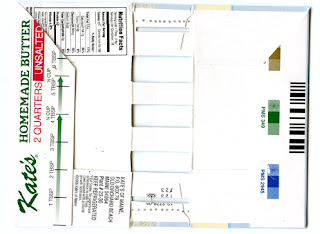 1.  Carefully unglue all flaps of the box;  then open out the box so that it is one rectangular piece.
2.  Place the unfolded box, inside facing up, on a tabletop, and fold in the flaps using the score lines that are already there.  Cut the top left and top right of the two side flaps on a slant, as shown in this photo.

3.  Use a glue stick to glue down the three flaps along the top:  left side, spine top, and right side.  Then glue ONLY the bottom spine flap in position.

4. Fold up the remaining two bottom flaps, and then glue just the bottom 1/4 of the two side flaps on top of the outside halves of the folded-up bottom left and right flaps, s shown in the photo.  You should now have two pockets, one on the inside front cover and one on the inside back cover.

6.  Use an Xacto knife and a ruler to cut along the lines you've drawn and to cut the sides of the three rectangles so that you've cut three rectangles, evenly spaced, along the spine.  Make the side cuts in the already-scored lines of the box.

7.  Now you need to mark and cut a thin (1/8 inch) space through the two layers where the top and bottom spine flaps are glued in place.  Draw these lines about midway in each flap, as shown in the photo.  Use the knife and ruler to cut out the thin spaces.

8.  Finally you will punch holes for each signature, using an awl with a piece of cardboard or an old telephone book under it to protect the table top.  You can't punch these holes until you have figured out how many signatures (groups of folded pages) you will need to fill the spine.  So put the cover aside for now and go on to step 9. 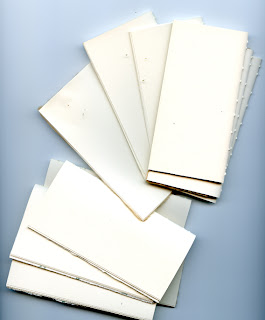 9.  Here's where you're going with the signatures.  This picture shows 13 folded and punched signatures.  Each signature is made by nesting 4 or 5 small sheets of paper (4 1/2 x 4 1/2 inches square), folded in half.  The folded pages are called folios.  When you nest the folios together, the little booklet is called a signature.

Depending on the thickness of the paper you use, you will need 4 or 5 folios for each signature.  So choose paper (really, anything you like is fine).  If you want watercolor or other heavy paper, make the signatures of only one or two folios. Remember that it's fine to mix up different kinds of paper in the signatures.   After you fold the signatures, press them under a pile of books for about half an hour to get a little air out of the creases. 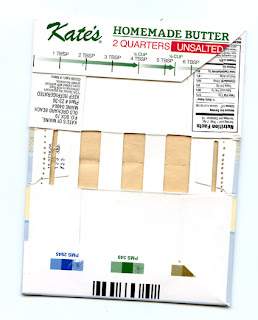 10.  This photo shows the opened out cover with an opened out signature underneath (the cream colored paper with the center crease showing through the rectangles in the cover).  You will notice that holes have been punched in the top and bottom spine flap fold-downs-- the ones I told you to hold off on punching.

Once you've made as many signatures as will fit comfortably within the covers, (stack them up and slip the pile in to see if you have enough-- they should fit snugly but you should not have to compress them to fit them.  You will probably have 12 or 13 signatures.) remove the stack and punch the holes using an awl.  Make the row of holes at least 1/4 inch down or up from the top and bottom of the spine, and be sure the holes are at least 1/8 inch apart to avoid tearing.  If you happen to mess up at this step, simply glue a piece of heavy paper over the row of holes and start over.

12.  To punch the signatures, first lay an opened-out signature along the lower of the two lines.  Then place the opened-out cover along the top line.  You should be able to see the center crease of the signature through the open rectangles in the spine of the cover.  Be sure the crease is perpendicular to the horizontal openings.  Punch a hole in in each signature at the following places:  in a top hole, in the narrow slit just under the top holes, at the top of the first rectangular opening, at the bottom of the first rectangular opening, at the top and bottom of the second and third rectangular openings, in the narrow slit at the bottom, and in a bottom hole.

Each signature should end up with 10 holes punched along its crease.  If the holes seem too small, when you've finished punching all the signatures, lay them one at a time opened out in the center crease of the phone book and re-punch them to widen them a bit.  The center crease lets the awl travel more deeply through the signature and widens the hole nicely. 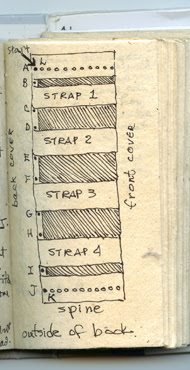 1.  To the left is a diagram of the spine of the book, before sewing, seen from the outside of the cover. You'll notice that a single signature is on the inside, pushed up against the left (or back cover) edge in the diagram.  This is the position in which you should start sewing.

2.  Thread a straight needle with heavy thread (bookbinding thread, upholstery thread, buttonhole twist, dental floss), about 2 yards (1 1/2 meters).  Do not tie a knot, and use a single strand, not double.  Begin by inserting the needle into the top left hole,  point A on the diagram, where the "start" arrow is.  Be sure to insert the needle into both the cover hole and the top hole of the signature.  Pull the thread through until a 5 inch (10 cm) tail hangs out.  Clip the tail to the back cover with a paper or binder clip for now.

4. Continue sewing this running stitch, pulling the thread taut over the straps and inside the signatures, until you pull the needle out of the bottom hole, point J.  Check to be sure all stitches are flat and taut (be careful when tightening-- best to pull parallel to the plane of the paper and NOT straight up to avoid tearing the paper).

5. Pick up the second signature and place it alongside the first one inside the cover.  Insert the needle into point K and into the first (bottom) hole of the second signature.  Stitch this signature just as you did the first one  (step 4).  This time, when you get to point L, back at the top, unclip the tail and tie it snugly to the sewing thread in order to anchor it.  Do NOT trim the tail or cut the sewing thread.

6.  Pick up the third signature and sew it exactly as you did the others.  This time, however, and for all other signatures, you will do a little scoop before inserting the needle into the next top (or bottom) hole.  The scoop stitch will result in a pretty chain stitch across the top and bottom of the spine.  You can leave it out and there is no structural problem, but it's easy to do and looks more finished.  See the diagram to the left. 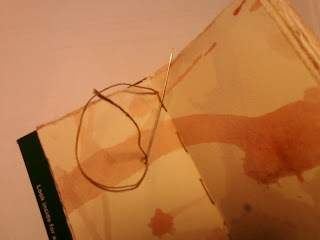 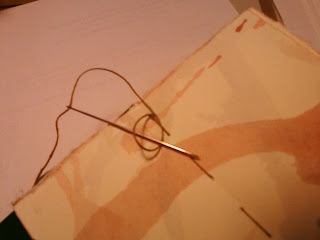 7.  That's really all there is to it.  To tie off, when you finish stitching the final signature, you will find yourself on the outside of the cover.  Insert the needle back into the hole just before the last one so that you are now on the inside of the second-to-last signature.  Tie of by sliding the needle under the stitch closest to it and making a little knot, as shown in the photos to the left.

After tying this knot, trim the thread to 1/2 inch (1cm) and then unthread the needle.  Now thread the needle onto the tail, which should still be around 5 inches (10 cm) long.  Tie off the tail thread the same as you did the other.  Repeat step 7, entering the hole to the right of point A to enter the second signature. 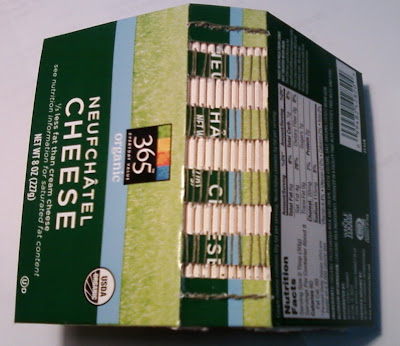 Below is the finished book.  You will notice that the cover has morphed from a butter box to a neufchatel cheese box.  With six sticks of butter staring at me inside our fridge yesterday, I opted to buy a slightly-less-perfect but still adequate neufchatel cheese box for this part of the demo.